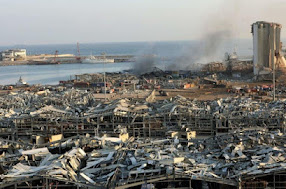 The year 2020 has shown us something that we never had seen ever before. Keeping the CoVID-19 aside, many other events took place that might make you hate this year. Here are the 15 events which took place in 2020, which will be always remembered throughout life. This generation will keep on telling their grandchildren that—“We have survived the year 2020.”

Personally and ironically, this year was one of the best years of my life because I learned a lot of things this year. I became wiser this year than in the year 2019. Perhaps, lockdown taught me, so I should thank that period that came in my life. But, some people did not like a single moment of this year 2020. Many laborers had to move to their native villages and this exodus harassed them enough to curse 2020. Even I wrote that ‘2020 sucks’ without knowing that I can make my own life better because I was not in a condition like those laborers—and that’s why it became one of the best years of my life.

Now, let’s talk about the major events that took place in the year 2020.

The bushfire spread more as 2020 came, but this fire started in the previous year 2019. This had made a vast impact on the biodiversity and native animals living there. According to a report, 47 million acres of forest burned down in bushfire, 34 people died, and approximately 3 billion animals including birds and reptiles. The Australian Bushfire ended in May 2020 leading to displacing thousands of homes. The images from the Australian Bushfire melted everyone’s heart across the world.

We were just had entered the year 2020 and it brought the fear of World War III. The United States did an Air Strike outside Baghdad, the capital of Iraq. The second-most important person of Iran, General Qassem Soleimani was assassinated in that Air Strike. This arose the possibility of war between the US and Iran as both countries are enemies. This war might have led to World War III. But, in the end, everyone was at peace somehow. This was the peace before the storm because something more dangerous was waiting for us.

The Coronavirus was begun to spread in the year 2019 but on January 9, the World Health Organization (WHO) announced an entirely novel virus spreading in Wuhan, China. It spread in 218 countries infecting 8,31,99,813 individuals (still counting) and the death toll reached 18,15,126 as this has been written.

It is still counting and spreading effectively. Another Corona strain also had emerged in the UK with 70% more effective in spreading and mutated spike protein. Wishing that this will end soon.

A famous American Basketball player, Kobe Bryant died with his 13 years old daughter, Gianna Bryant in a helicopter crash. This spread a ruffle of grief amongst his fans and sports lovers.

On March 22, a voluntary lockdown was imposed in India for 22 hours. On 23 March, at 5 p.m. the public went mad and started banging dishes and other vessels. On March 4, the 21 days lockdown was imposed again and then extended up to April 4. The second lockdown was applied from April 4 till May 3. Lockdown 3 then extended from May 3 to 17 May and lockdown 4 was then extended till the date May 31. Unlock 1.0 started slowly with openings of certain places and with restrictions. This made us wear masks and use hand sanitizers regularly. The laborers were in trouble and a man with a golden heart, Sonu Sood came to the rescue and conveyed many laborers safely to their homes.

Everyone was surprised enough after hearing the news of the death of the North Korean Supreme Leader to create a saying that ‘Anything can happen in 2020.’ After the absence of Kim-Jong in the commemoration event of his grandfather, Kim-Il Sung, everyone was making speculations about his health and even rumors came out about his death. He then reappeared after 20 days healthy as a horse in photos at some ribbon-cutting ceremony.

Bollywood lost its most talented supreme actors, Irrfan on 29 April and Rishi Kapoor on 30 April.

The owner of multiple companies like SpaceX and Tesla, and an entrepreneur Mr. Elon Musk became the father of his seventh son on May 4. He tweeted the name of his son on Twitter which resulted in the rain of memes. For common people, it was something gibberish but in real the name was composed of different mathematical symbols. He named his son X Æ A-XII. There were many memes made on this incident.

On May 16, the cyclone struck Eastern India and Bangladesh and killed nearly 85 people. It was the most powerful cyclone in the last 20 years and did enough desolation. Many people became homeless due to Amphan cyclone. Many were rescued by the NDRF team and were made refugees in camps.

The protest against police brutality started with the killing of black American Hip-Hop artist George Floyd on May 25. The video of the killing became viral and the whole world stood against the police brutality and supported the black people. Many Hollywood celebs came forward to support the black people. The racial injustice should end. Also, the protest got booming when Ahmaud Arbery and Breonna Taylor were killed by police. The hashtags trend on Twitter and Instagram. #BlackLivesMatter

A successful outsider in Bollywood did suicide which shook the whole Bollywood industry and the whole of India. He was a fabulous actor as well as his knowledge and passion for space was incredible. His suicide opened many cases against Bollywood like Nepotism and Drug addiction. His last movie, Dil Bechara released after his death and received a lot of applause from the audience.

The massive explosion happened at Beirut Port on August 4 due to the accidental detonation of 2750 tons of ammonium nitrate. The stored stock of ammonium nitrate was kept on the port exploded killing 190 people and thousands of injured.

The plane crash at Kozhikode, Kerala happened on August 7. The plane tried to land on a tabletop airport that met an accidental crash that resulted in the killing of 190 passengers on board. The pilot of the Boeing IX747, Mr. Deepak Sathe also died in that plane crash.

The farmers of Punjab and Haryana start protesting against the Farm bill passed in Lok Sabha. The Farm Acts, 2020 made a powerful impact on farmers, and revolt against the government started. The protest intensified in December outside Delhi border. The protest started peacefully on August 9 eventually taking the violent form. The negotiations between farmers and the government of India are still going on. Let’s see what is going to happen!!!

The Black Panther actor, Chadwick Boseman said goodbye to this world after battling colon cancer for 4 years at the age of 43. He will always be in the hearts of every fan of the Marvel Cinematic Universe. ‘WAKANDA FOREVER.’

Conclusion: The year 2020 has been a roller-coaster ride. The year 2020 was great for one whereas nonsense for others. This year taught us many things and made us realize how cruel nature can become if humans will try to go against it. It was humans’ fault that leads to this unforgotten pandemic. We wish that it will end soon. Many other major events also happened during 2020. Whatever has happened, we have at least learn a lesson from 2020.