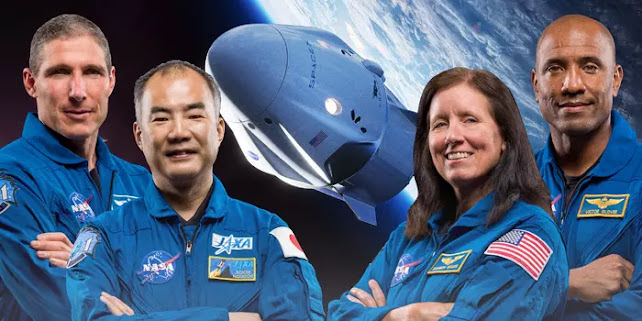 SpaceX and NASA will launch four astronauts to the International Space Station on November 15, 2020, from Kennedy Space Centre Launch Complex 39. The SpaceX’s Crew Dragon spacecraft will lift off at 7:27 pm EST (5:57 am IST) for a six-month-long mission. It was scheduled to lift off at 2:00 am IST on November 14. The live coverage of the event will begin at 3:15 pm EST (1:45 pm IST). Do you want to see live coverage of lift-off? No need to go or redirect anywhere!!! WATCH LIVE COVERAGE HERE.!!!

Additionally, just before this Crew-1 mission, NASA certified SpaceX Falcon 9 rocket and Crew Dragon Capsule. This means that from now on SpaceX can operate flights to International Space Station (ISS).

What is Crew-1 Mission?

The Crew-1 Mission is a part of NASA’s Commercial Crew Program. The aim of this mission is to make easy access to space. The cost-effectiveness and transportation of crew and cargo to and from the ISS is the main objectives of this mission.

He was born on April 30, 1976, is a NASA astronaut of the class of 2013 who completed his training in 2015. He is a commander in the U.S. Navy and a F/A-18 pilot. He is the pilot of the Crew dragon Spacecraft on this Crew-1 Mission headed to International Space Station (ISS).

She was born on June 4, 1965, is an American Physicist and NASA astronaut. She has experience of living on ISS. She was launched on her first mission in space on June 25, 2010, by Soyuz TMA-19. She stayed on ISS for 163 days for a long-duration mission. She is again going onboard for a six-to-seven month-long mission.

Soichi Noguchi        He was born on 15 April 1965 who is a Japanese Aeronautical engineer and JAXA (Japan Aerospace Exploration Agency) astronaut. He also has some experience of ISS and returning theirs via the Crew-1 mission. He is fifth Japanese astronaut to fly in space and fourth to fly on the space shuttle.

He is a Colonel, U.S. Air Force, and NASA astronaut who was a member of Expedition 37/38 crew and logged 166 days in space. He launched from Baikonur Cosmodrome in Kazakhstan to ISS in 2013. He conducted two spacewalks of a total of 12 minutes and 58 seconds during his stay aboard the station to change out a degraded pump module. He holds a Bachelor of Science and Master of Science degree in Aerospace Engineering from the University of Illinois and Stanford University respectively.

What will these four astronauts do at International Space Station?

1)        They will join the crew members of Expedition 64 and will conduct microgravity studies.

2)        They will deliver new science hardware and experiments that they will carry with them in Crew Dragon Spacecraft.

3)        They will carry some research material to study food physiology……

……to study the effects of dietary improvements on immune function.

……to study the gut microbiome.

……to study how those improvements can help crew adapt to spaceflight.

4)        They will also conduct a student-designed experiment called “Genes in Space-7” whose objective is to understand how spaceflight affects the brain function.

5)        Other experiments will help scientists to understand physical interactions of liquid, rock, and microorganisms.

Conclusion: SpaceX and NASA both are constantly moving forward and taking mankind to another level. This Crew-1 mission itself is proof of the constant furtherance as well as progress.